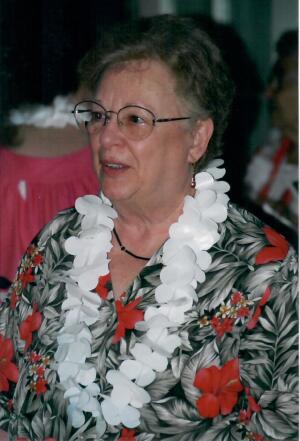 She was born on July 1, 1936 in Malone, New York and was the daughter of the late, John and Lillian (Susice) Surprise. She was educated at Dolgeville Central School.

On August 23, 1952, Shirley was united in marriage to Merwin G. Lyon at the Dolgeville United Methodist Church Parsonage in Dolgeville, New York. The couple shared a union of 45 years when Merwin passed away on January 28, 1998.

Shirley was formerly employed with Dolgeville Central School as a bus driver and with the cafeteria staff for 33 years until her retirement on July 1, 1998.  Before her dedicated service to the school, Shirley worked part time with the Lyon Greenhouse also in Dolgeville, New York.

In her spare time and earlier years, Shirley enjoyed gardening, knitting, crocheting, cooking, baking, bowling, going to coin shows with her husband, Merwin "Mers Coins and Hobbies" as well as cooking dinners for the Fire Department and Eastern Star. A devoted wife, mother, grandmother and great-grandmother, Shirley will be deeply missed by her family and community.

Calling hours will be held on Saturday afternoon, March 27, 2021 at 3:00 p.m. to 4:30 p.m. at Miller-Plonka Funeral Home, 30 Wolf Street, Dolgeville, New York. A funeral service will be conducted by the Sisters of Auskerada Maquaes Rock City Chapter # 204, Order of the Eastern Star following calling hours at 4:30 p.m. All are welcome to attend. Please wear a mask and follow social distancing procedures. Interment will be held in Dolgeville Cemetery at a date this summer to be announced.

To leave a message of sympathy or to order flowers for the Lyon Family, please visit www.millerplonkafuneralhome.com and sign the tribute wall.

To send flowers to the family or plant a tree in memory of Shirley A. Lyon, please visit our floral store.